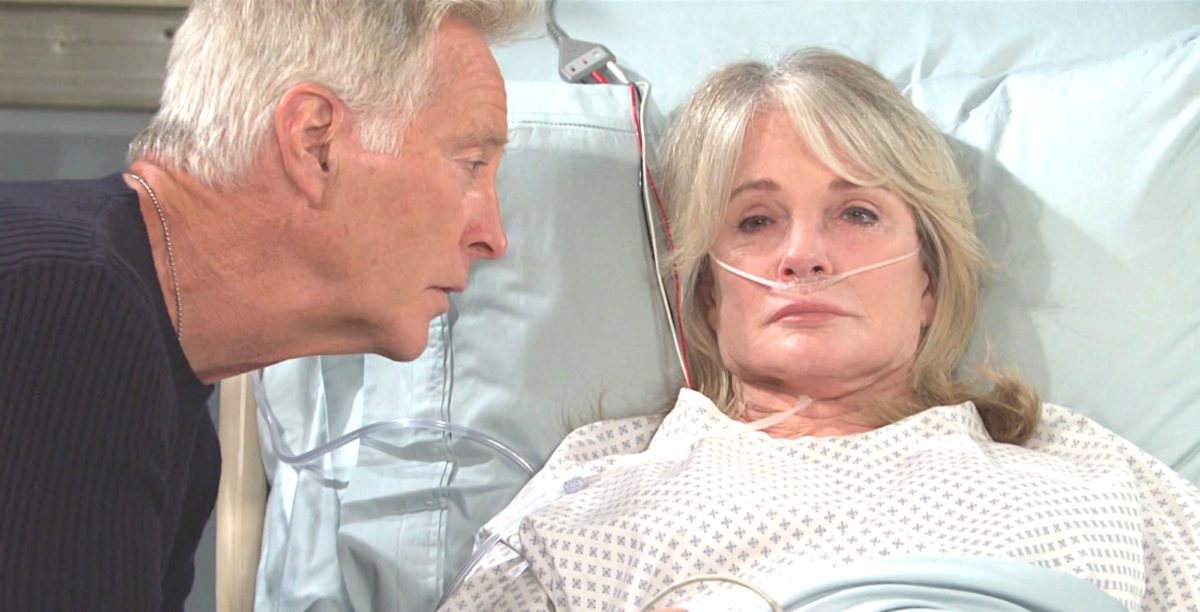 On today’s Days of our Lives, John Black isn’t amused when Marlena, like Kate before her, insists on being taken back home to die.

In addition to John’s reaction to Marlena’s want for a change of address, Kristen DiMera’s (Stacy Haiduk) flight from justice was stymied — no thanks to EJ (Dan Feuerriegel), who would have happily let his sister make tracks with Rachel. Now, let’s dig a little deeper into what exactly happened.

John Black Is Shocked By What Marlena Asks Of Him

John Black (Drake Hogestyn) is having a day. Make that a year. And it’s only 2023…or whatever year it’s supposed to be in Salem, given that they jumped at least a year ahead way back when.

With Marlena (Deidre Hall) deathly ill and coding at the drop of a hat, John could really use a break — not that he’d take it. And perish the thought that he’d leave his beloved’s side for a reason other than giving their daughter alone time with her mother. Hi ya, Belle (Martha Madison)! Long time no see.

The one act that John can find comfort in — other than being snuggled up next to Doc — is prayer. He indulges with Eric Brady (Greg Vaughan) and Will Horton (Chandler Massey) in the hallway right outside Marlena’s room and in the hospital’s chapel. But even his moments of solace are interrupted by such pronouncements as Kristen has kidnapped Rachel — more on that below — and other such disappointments. But John soldiers on. He can cope. He has to cope. Who else is going to do the coping for him?

Still, John was more than blindsided when Marlena rallied from her unconscious state long enough to beg him to get her out of there. “I want to go home. Take me home.”

DOOL Recap: A Question Of Custody

Given that Kristen and Brady Black (Eric Martsolf) need a timeout from one another — and how! — Kristen thinks that it would be swell if she and Rachel went on an adventure together. Read: she wants to get herself and Rachel very much out of dodge in case the authorities catch up with her.

Ever the bad mother, Kristen puts the ball firmly in Rachel’s court. Who would the little girl most like to go with? Mommy, or Daddy? She can only choose one.

Of course, Rachel throws her all behind Kristen. In fact, she’s raring to go. Rachel especially doesn’t want a little thing like her and Mommy running into EJ to spoil things — and spoil things it very nearly does. For about .5 seconds, EJ grows a conscience. There’s no way he’s going to let his sister kidnap his niece. Uh uh. Nope. Not going to happen. It’s EJ to the rescue…until it isn’t.

All it took for EJ to back down was for Kristen to reach into her bag of tricks and threaten to clue Stefan (Brandon Barash) in on the fact that EJ knew all about his brainwashing and said nada. Stefan is really the gift that keeps on giving.

Luckily for all concerned, Brady was alerted to the fact that Rachel was in imminent danger and was able to stop Kristen from getting very far. The highlight of the very long, very bad day? Rafe Hernandez (Galen Gering) and Jada Hunter (Elia Cantu) slapped the cuffs on Kristen’s wrists and tightened them just a tad too tight.

Though they each have hate in their hearts for Kristen, Belle, Eric, Will, and Allie Horton (Lindsay Arnold) gather in the chapel, link up, and pray. They pray for Marlena’s recovery. They pray for Rachel’s safe return. And they pray that the Lord gives them the strength to go on should their first prayer go unanswered.