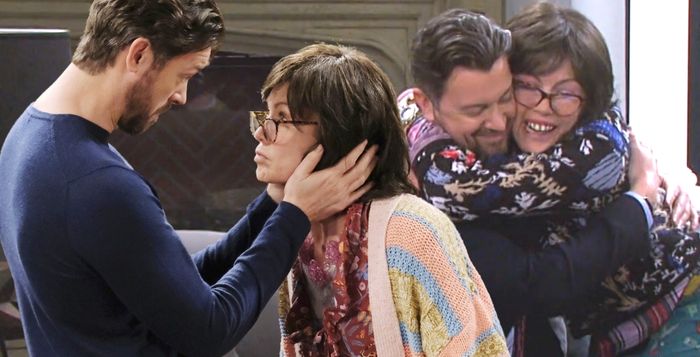 The romantic couples of Days of our Lives haven’t had much to smile about lately. Either the women were dying, or the men were getting fired, or somebody was cheating on somebody, or somebody was being blackmailed. So it’s no surprise that the pairing that’s putting a smile on our faces these days is the mother-son duo of Susan Banks and EJ DiMera.

EJ (Dan Feuerriegel) is usually so dignified, so composed, so dapper, so…English. Nothing ruffles his feathers. Not being dumped by his ‘Samantha’ Brady (Alison Sweeney), not being baited by Ava Vitale (Tamara Braun), not being challenged by Chad DiMera (Billy Flynn), and not being taunted by Xander Cook (Paul Telfer).

But let the hurricane known as his loving mother blow into EJ’s impeccably decorated living room, and all bets are off. Susan (Stacy Haiduk) can befuddle EJ like no one else. She talks about visions and dangers and premonitions, and EJ has no choice but to listen. And get sucked into her version of the world.

It would be one thing if EJ treated his mother with contempt. Everything about who he is the rest of the time would suggest he’d blow her off, and rather rudely, too.

But what we’re loving is how much EJ obviously adores his wacky, daffy, addled, scattered mother. Yes, he had a fancy education, yes, he’s an English gentleman, yes, he runs a multi-million dollar company where he treats all those not up to his standards with not even barely-veiled contempt.

But he loves his mommy. And, more importantly, he takes her seriously. Even when he doesn’t want to. Susan may seem like a flake. But she was obviously a loving, caring, nurturing mother. EJ’s treatment of her makes that clear.