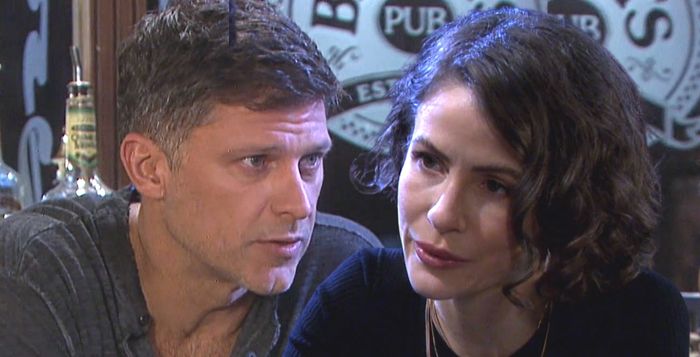 Days of our Lives: Proud As A Peacock

We’ve had ghosts and kidnappings and an election so bogus it was impossible to believe the writers had ever voted for a 3rd-grade class president, much less a major office. Everything was broad and loud and played for laughs, if not outright camp. And then, in the middle of all that, we got one of the most moving scenes Salem has seen in ages.

Sarah Horton Cook (Linsey Godfrey) and Eric Brady (Greg Vaughan) have quite a history. They were childhood friends (mostly off-screen, we had to take their word for that) who had a brief romantic relationship…but then the true love of Eric’s life, Nicole Walker (Arianne Zucker), came back from the dead, and Eric dumped Sarah for her. Without Sarah getting the chance to tell Eric that she was pregnant.

Xander Cook (Paul Telfer) pretended to be Baby Mackenzie’s daddy for almost a year before the truth came out: Mickey was Eric’s. Eric and Sarah bonded over their daughter, especially when she was sick…but then the rug got pulled out from under them again when it came out that Xander had switched babies, and Mickey was actually Rachel Isabella Black, the daughter of Brady Black (Eric Martsolf) and Kristen DiMera (Stacy Haiduk). The real Mackenzie Horton was dead.

Days of our Lives: Time Heals All Wounds

It took a very long time for Sarah, Eric, and Xander to overcome that pain. But then, on Halloween, Rachel had a stomachache, and Kristen, being not just an overall crazy person but also a crazy mother, practically insisted on a CT-Scan to make sure her precious was OK. Instead, Brady asked Sarah to make a house call.

The check-up was deeply emotional for Sarah, and when she revealed it to Eric, both shared a sweet, poignant, quiet memory of the little girl they were forced to give up. It was heart-wrenching, it was real, and it was what people watch soap operas for. More, please!